This page is more for the car enthousiast; if you don't care much for cars, or at least scenic roads, you probably ought to move along.

I enjoy going on spirited drives with my cars, and other car club events. You can find pictures in the car events page.
Before I continue, all my pictures are here. 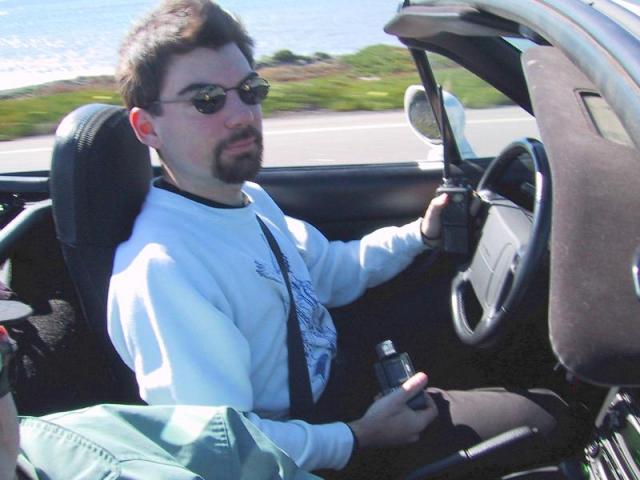 Scenic drive back up HWY 1, with the ocean on the side

Before the Miata, I had another Mazda, a 1990 Protege. 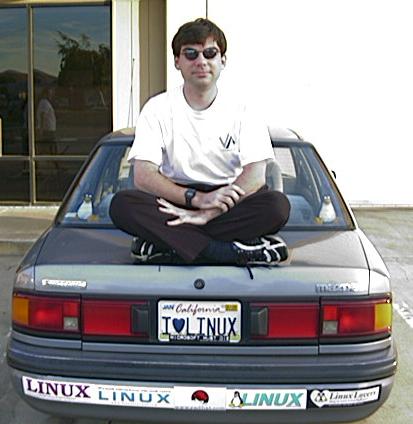 The Protege is a good car for its class, and with its 1.8L engine has a little more power than stock cars (the original protege is a 1.6L), which gives it an SCCA rating (sports car club of america) of E (A is best H is worst). But don't get confused, it doesn't make the protege a sports car, they let you race anything, even a Yugo (which, as a crappiest car know to man, gets a rating of H) :)
That said, it was a good daily driver, occasional Tahoe/snow car, and a cheap reliable daily driver.

The protege was a good car, and all, but I wanted a convertible, and something with a little more power. Since I couldn't quite afford a BMW Z3, a Honda S2000, a porshe Boxter/Carrera, or an Audi TT (these are $35,000 to $80,000 cars), the Miata was an obvious choice, especially because being older, you can actually find reasonably priced ones.

It turns out some that people who actually have money for either, still buy a Miata. I guess it says something about the car

So, I got myself a good used 1995 Miata. Not only was it in very good shape for a 5 year old car, but it came with nice options for a non M-edition miata: cruise control, power steering, power mirrors, A/C, and headrest speakers.
Later, I made many mods to the car, including more than doubling its horsepower and making it faster and more agile than pretty much any convertible within 2 or 3 times its price (not to show off, it actually doesn't look like much, but because I enjoy the passing power, and the extra horsepower when I'm on the track) 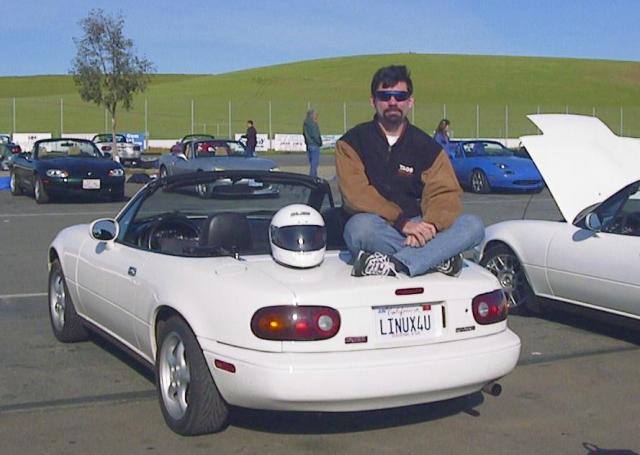 While the 1.8L miata isn't a beefy as the other roadsters listed above, it still gets an honorable SCCA rating of B (it doesn't come with a turbo or a supercharger, but that can be fixed

(see the Flying Miata web site for proof)).
I guess the main reason why the miata (called Mazda MX-5 outside of the US) is such a popular is that in its class you get the most car for your bucks, and it's a fun car to drive. It handles surprisingly well, but being a rear wheel drive car with enough power, you can get the back to slide if you're not careful (the tires make a big difference though, mine slide left and right in powerturns in autocrosses, while I've seem similar miatas with much grippier tires make the same while keeping constant grip with the road.

Soon after I got my Miata, I joined the Bay Area Miata Association
I've joined many Miata Events, as well as other ones, for which I have many pictures on the events page

Then again, this eventually ended up not being the right group for me, so I joined BAMO, the Bay Area Miata Outlaws

Mods to my Miata

While I'm not a car mecanic, like many, I can't resist to apply small improvements to the car here and there.
So far, what I've done is:

This is my latest toy, to replace my aging Mazda Protege, and it had to be faster than my miata, which well, is damn fast already

.
So, I ended up with one of my dream cars back when I was learning about fun cars: a BMW M5 (this is really all Top Gear's Tiff's fault, you can click on this big video to see why).
It has about as much power as an Ferrari 360, has a top speed that is apparently slightly higher (mine doesn't have the speed limiter at 155mph/250kph, I somehow know that it goes to at least 170mph/272kph, and apparently it can reach about 190mph/300kph given enough road and the right conditions). Its 0 to 60mph/96kph time is 4.8s instead of 4.5s for the lighter Ferrari. All in all, those are very respectable numbers considering how much bigger the M5 is, that it can carry 5 people and has a much much bigger trunk 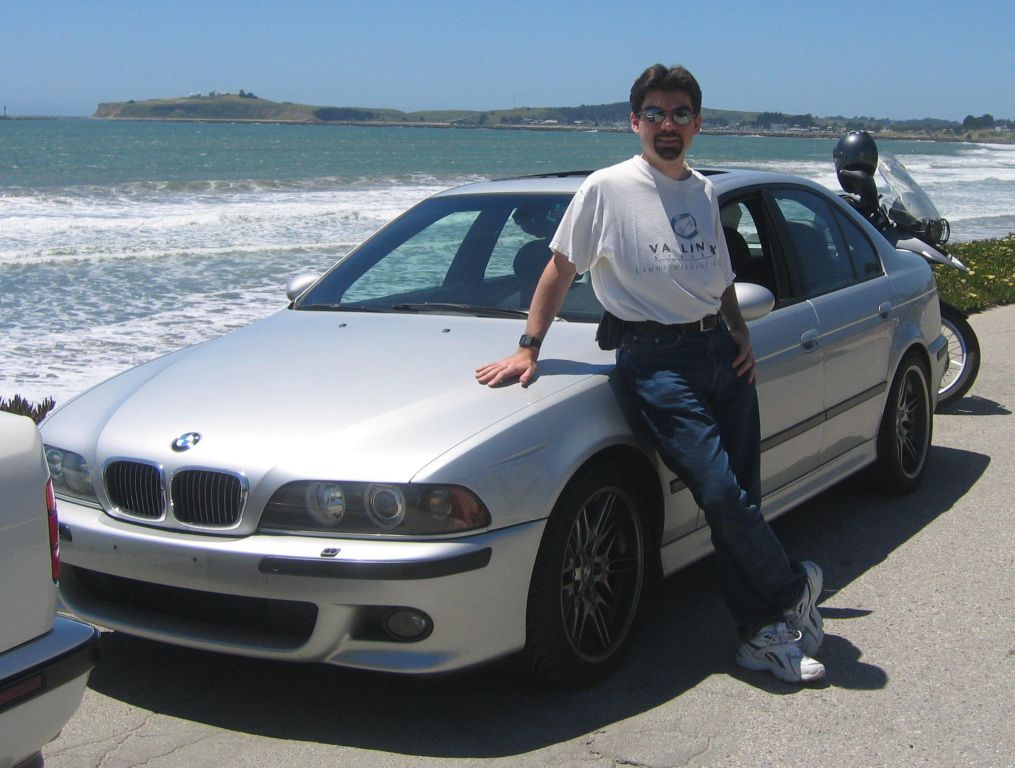 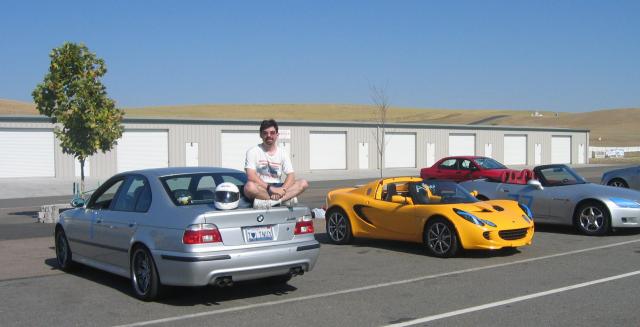 At thunderhill racetrack, looping for fun 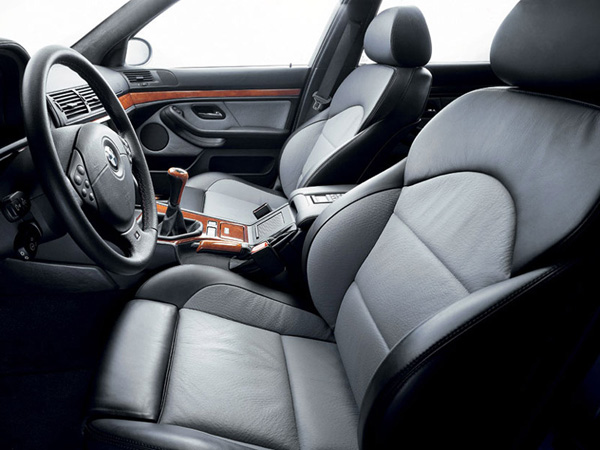 Yes, it's quite nice inside too

Eventually, my miata required more maintenance (due to the turbo), than I was able to give it, so I gave it to Rick Weldon to give it expert care instead of having all the work that went into the car end up in some junk yard, or sold to someone who wouldn't know how to address the O2 mixing issues and resulting misfiring it had developed.

So, came the task of replacing the miata with a roaster that was at least as fast at the track, and that was stock (no more long list of aftermarket mods that made any sane mechanic refuse to work on the car after that).
My former miata was so fast at the track that the resulting list of options was quite small, and I had to "settle" for an F430

.
The car is obviously a lot faster in a straight line (sub 4 sec 0 to 60mph, top speed a bit over 190mph/310kph), but on stock tires, it was at least as fast as my severely modded miata on sticky tires, which was exactly what I was looking for

(sub 2mn14 at thunderhill, and I'm now sub 2mn09 with "enhanced" street tires and a bit more skill).
It is indeed an amazing car to drive, especially with what it lets you do with traction control in race mode, while still saving your butt where necessary. 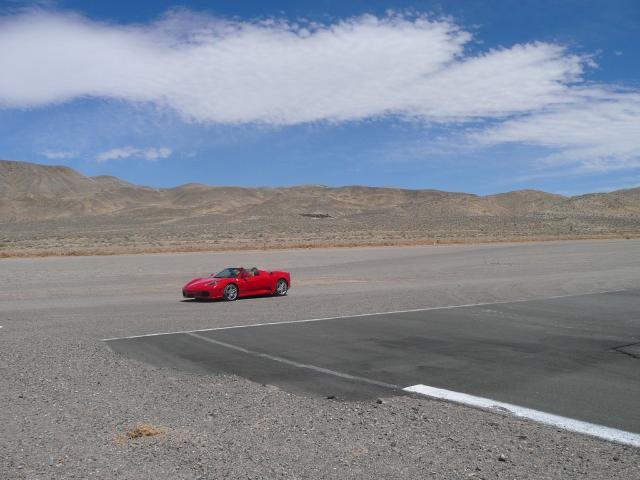 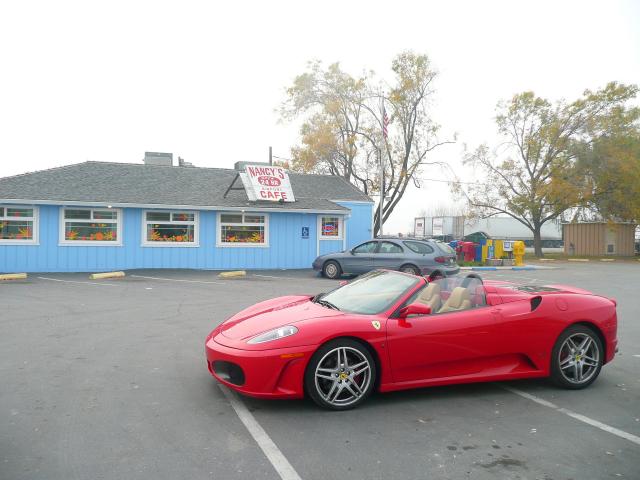 By Nancy's Cafe in Willows by the runway 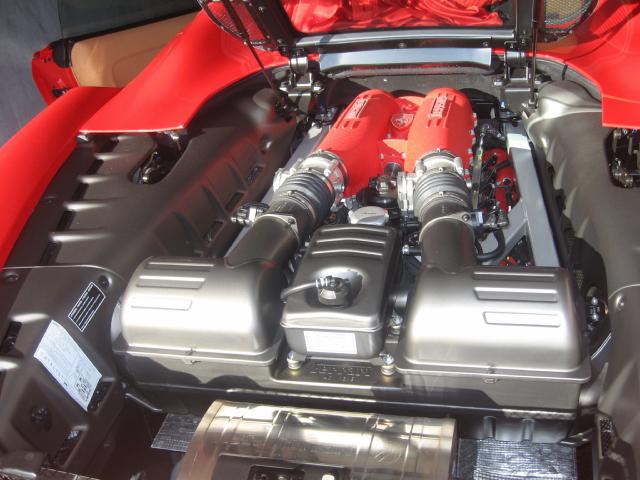 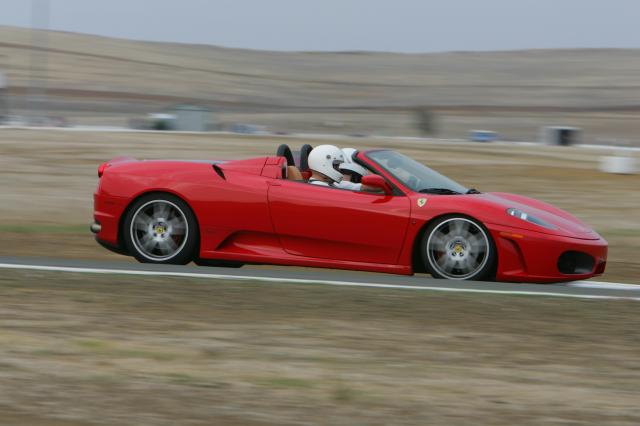 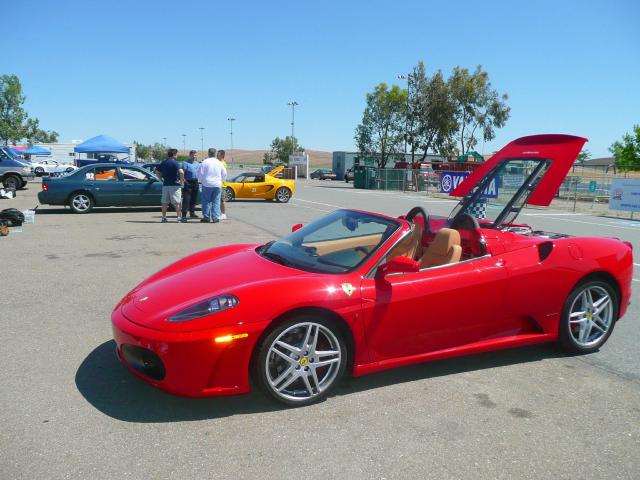 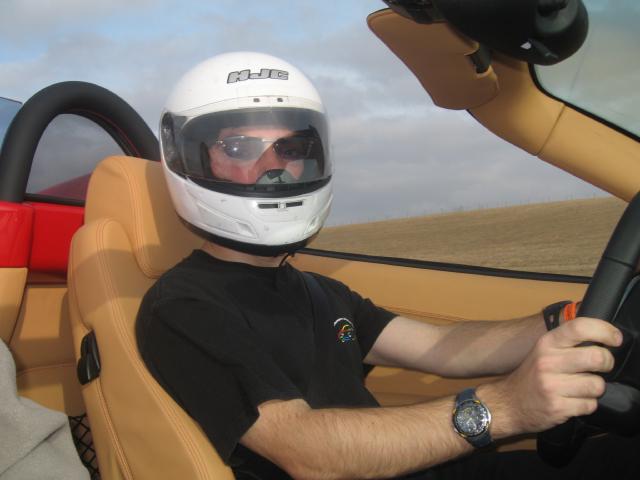 Well, I did have a good time with the 430. Over time I brought my TH times down to 2:08 and mostly got stuck there (with good street tires). I know the car had a bit more, but I did run out of talent.
Still, I had a good time trying and having fun with track buddies and work colleagues, as well as the occasional spirited drive.

That said, the F458 came out, the GTR started being able to do more than 4-5 laps faster than me and without overheating or blowing up a transmission, and well, after 6.5 years came time to upgrade.

The F458 spyder was the obvious choice, I drove the 458 on the track, it is a good car, nothing to complain. The hard top was nice too. But... at the time it was about to come out I wasn't mentally ready to buy one, and by the time I was, the wait was 1.5 years.

Around that time came out the McLaren MP4-12C, and finally its spider version. It's a totally different car (twin turbo small 3.8L V8 twin turbo with 28psi of boost (!) to deliver 620HP), and yet the relative performance of the F458 and the MP4-12C is actually pretty close, each car wins on some points. This article does a nice comparison of the F458 and MP4-12C convertibles.

So the McLaren won for me, and the fact that it was available for order and delivery within 3 months was no small part of it, but I'll be honest that I am fond of the aero wing that can be used as an airbrake and add downforce on the rear tires under braking at the same time. I think that's brilliant. I also liked the geometry which allowed the car wheels to stay flat under cornering when the ferrari was using up the tires sideways. I wrote more details on the comparison and the choice here.

On my first track day, I got my time down to 2:03 at TH, and I know it can go lower once I get better. Unfortunately on the 2nd day the undersized and undercooled steel brakes didn't do well with the higher heat. We'll see how this goes after some adjustments (I also had to upgrade the F430 brakes). Right now, I'm down to 2:02 and hope to reach 2:00 as I learn to drive the car better. My BMW M5 was still a great car, but it was almost 15 years old, and missing the new technology that's been around for several years. I was personally interested in self driving features as well as safety features (auto braking, lane departure warning, not hitting the car in your blind spot if you missed it, etc...). But more recently I had been waiting for a car that could drive itself in a freeway lane (if you think about it, it's not that hard a problem compared to driving on city streets). Mercedes kind of that had, but it failed when I tried it during a test drive. Tesla had been promising this for almost a year, but I was a bit dubious that they could deliver with the limited sensors on the current model S. They however proved me wrong, and that was great because I did prefer the idea of having an electric car to another gasoline car anyway. Learn about tickets, how to avoid them, and how to fight them if they are undeserved. Please give a monetary contribution to Geo for his work if it was helpful to you.